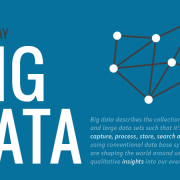 Data has quickly become one of the primary driving factors in society – with the world continuing to evolve in such a way that access to online information is nothing short of a necessity for a lot of people.

We’ve thrown together a cluster of interesting facts and figures regarding data usage and presented them, rather fittingly, in infographic form. Here’s just a little taster of some of the fascinating stats you’re about to discover.

We’ve already hinted at the extreme amounts of data which get used up every day, but the numbers themselves are nothing short of staggering.

A testament to this recent rise in reliance comes from the fact 90% of the data that currently exists was only created within the last two years.

The numbers themselves speak volumes as well, with it estimated 2.5 quintillion bytes are created on a daily basis – enough to fill 10 million blu ray discs (which could themselves sit as tall as four Eiffel Towers stacked atop of one and another).

With 51 billion gigabytes used in 2013 alone, it seems as though the continued reliance on online technology is set to become more prevalent.

It’s perhaps unsurprising social media is an area which sees some of the biggest figures regarding data usage. These online platforms have picked up a negative reputation of late, but do give people the chance to express themselves creatively – as well as interact with others.

Some of the numbers are nothing short of breath-taking in this area, with figures seeing:

This “unstructured” data accounts for 90% of everything which is used on the internet – a number which will only continue to grow as more people start using social media on a regular basis.

It’s not all about showing off the latest taste sensation you’ve created for your followers, however. Data can also be used to help improve people’s health.

Currently seven in every ten British citizens track their health using specialist apps – with 50% of them claiming the results have made them undergo significant behavioural changes.

A quarter of all people aged between 25 and 44 would go as far as to say they would make alterations to their lifestyle if their smart devices prompted them to.

The market is becoming somewhat over-saturated though, with over 100,000 health apps currently available for download.

If you’d like to find out more about the crazy levels of data which are used every day, and how they’re impacting the world, check out this amazing infographic: